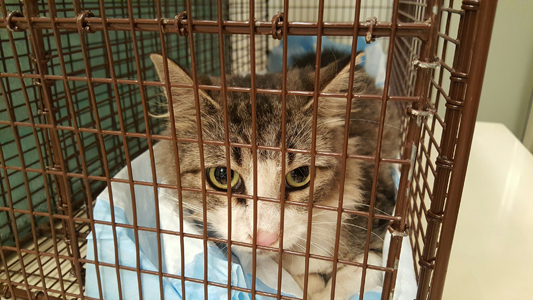 In August of 2016, NFFAR received information from Pathway to Hope regarding a horrific situation.  A woman, who was feeding a family of feral cats, had observed a wire around the mother cat’s neck.  She attempted to trap the cat to no avail.  The situation had been going on for over a month.  NFFAR’s TROT responded to the request and trapped the mom cat, the dad and the four kittens.  All but mom cat were spayed/neutered/ear-tipped and vaccinated and returned to the woman.  Mom cat, nicknamed Wire Mom, was in rough shape.  The wire turned out to be baling wire and was twisted like a loop around her neck, creating a gaping wound.  The wire was removed and the wound was treated continuously over the next several weeks.  On Labor Day morning, we got a big surprise…Wire Mom had given birth to three kittens!!  Two out of the three survived but mom was too stressed out to nurse them.  The two babies went directly into foster care and were later adopted.  After a couple of more weeks Wire Mom was spayed, ear-tipped and vaccinated and returned to her home, reuniting with her previous kittens and under the watchful eye of her guardian.

© 2003 - 2023 The National Foundation for Animal Rescue. All rights reserved.
a 501c3 nonprofit organization