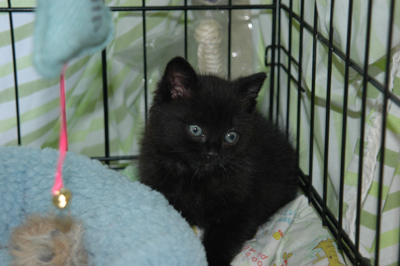 This is the story of a tiny kitten, just 6 weeks old, that went through more than most animals and people go through in a lifetime.  He was a kitten without a home or a family to call his own when a wonderful woman NFFAR has assisted over the years brought him to one of our volunteers for adoption.  His black coat was full of soft kitten fuzz and he had bright blue-green eyes that beckoned all that met him to cradle and cuddle him!

So a foster home was found and the kitten was on his way to find a lifetime commitment home.  Unfortunately, without any disclosure to NFFAR, this foster person made a critically poor decision and allowed the curious innocent kitten to mingle with a baby raccoon she took into her possession to rehabilitate.  The result was disastrous, as the kitten could not defend itself and was severely bitten about the head.  The foster person rushed the kitten to the Valley Cottage Animal Emergency Hospital in New York State and upon first observation the vet asked me, over the telephone, if I wanted the kitten euthanized.   Since I was not present and did not feel comfortable making a life and death decision without more information, one of my incredible volunteers came to the rescue.  She soon arrived at the hospital and was able to assess the situation.  She and I agreed not to put the kitten down but to wait 24 hours and give him a chance to show us that he was ready to fight for survival.  If he was no better than we agreed we did not want him to endure acute pain and suffering if he was bound not to have the strength to make it.

So with great anxiety we waited, hoped and prayed that he would come around.  His name had been Dandy, after the woman who brought him to NFFAR.  The next day Dandy was still holding his own, on heavy doses of pain-killers.  He had a skull fracture and numerous puncture wounds and the vet staff was concerned about Dandy’s ability to see and hear due to the significant trauma.

For two long weeks Dandy fought to survive, as the vet staff gave him ‘round the clock supportive care.  He appeared to have his hearing intact and although his third eyelids were protectively shielding the majority of his eyeballs as a result of the incident, he appeared to be able to see.  He ate like a champion, and that was most encouraging, first being syringe fed and later graduating to eating solid food on his own.  The puncture wounds and the skull fracture were healing but due to the severity of the incident Dandy had no living tissue on his forehead, as dead necrotic skin was peeling off.

While in bed dreaming about the mighty kitten, I wanted to rename him.  Suddenly I awoke and bolted upright and shouted, “Darwin!  Survival of the fittest!”  So Darwin it was, which evolved into Baby Darwin because he was still so small.

At the end of two weeks, the vets at Valley Cottage said that there was no more they could do for him and that he could go home.  Well home turned out to be an obsessively clean bathroom, equipped with latex gloves, disposable gowns and antibacterial soap for anyone who entered.  My husband, my volunteers and I cleaned and dressed his wounds and gave him lots of love.   A week or so later he became lethargic and threw up blood.  Back he went to Valley Cottage where he was fed intravenously and medicated.  He recovered in several days but one of the vets alerted me that Darwin would need a skin graft or else he would have serious life-threatening problems.  With no living tissue to support skin growth and a steady contraction of the remaining tissue on his forehead, he would become severely disfigured and may end up having to be euthanized.

I was rather taken aback by this news and quickly made a call to a veterinary neurologist that I trust implicitly.  I knew he would give me the best recommendation and that he did.  Dr. Jennifer Bonczynski, a specialist in soft tissue surgery at the Animal Medical Center in New York.  So off we went to meet Darwin’s next savior.  Dr. Bonczynski and Dr. Ryan Cavanaugh greeted us warmly and were anxious to meet Baby Darwin.  After examining him, they said that this would be a very challenging case but that they were excited to take it on. 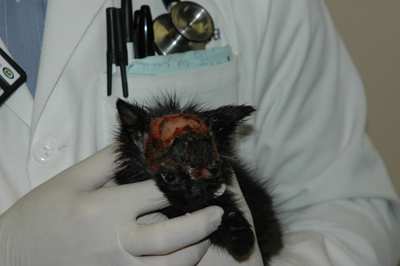 The day we brought Darwin in to the AMC he was admitted and had a surgical procedure, and the next day, and the next day.  With my crazy schedule I was only able to visit him at night, after regular visiting hours, but everyone at the distinguished hospital was very accommodating.  Almost immediately, Baby Darwin became the favorite patient of Surgical Service 3.  His entire head was bandaged, except for his tiny ears poking out and one eye.  The other eye was not in good shape and a decision was made to remove it, leaving no room for major complications down the road for the little boy.  When I was told he would lose the eye I cried.  I felt so bad for the little boy, and a resurgence of angry feelings overcame me for a moment.  I rebounded, realizing that this is now and that was then and nothing in the world could reverse what happened. 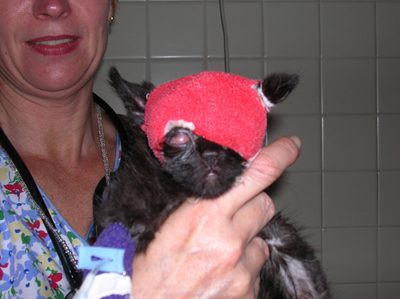 After removing all of the dead tissue from his head and implementing techniques to encourage new skin growth Baby Darwin was ready for his skin graft.  The doctors were able to take skin from the back of his neck, which already had its own blood supply, and rotate it onto his head.  The surgery was a success!  Due to his small stature, instead of a regular Elizabethan collar around his neck to prevent him scratching the stitches, Darwin wore a customized paper plate!  He had just a little peach fuzz growing on his pink baseball-stitched head and looked a lot like Yoda from Star Wars. 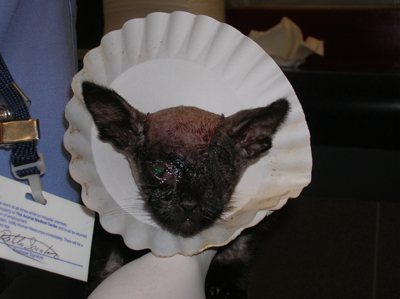 His recovery has been nothing less than amazing, with rapid healing and hair growth to the point where he resembles one of those plastic toy trolls with the long hair sticking straight up.  He eats with vigor and plays with great enthusiasm and has seamlessly integrated into our household.

The little kitten with all the promise in the world met the challenge of his life with remarkable grace and fortitude.  I only hope that his future is nothing but bright and carefree.  Darwin has many guardian angels, those who cared for him at the Valley Cottage Animal Hospital, our dedicated NFFAR volunteers, the selfless donors who paid a majority of the $8,000.00+ in hospital bills, and the incredible vets and techs at the Animal Medical Center.  Without all of you Baby Darwin would just be a bittersweet memory.  THANK YOU♥ 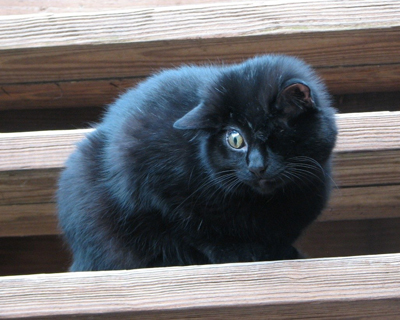 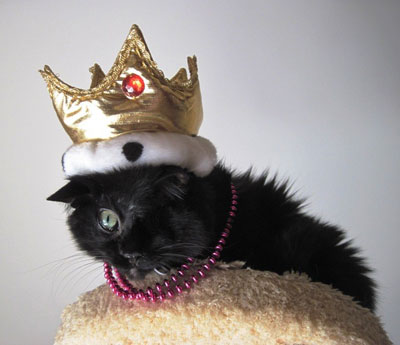 © 2003 - 2023 The National Foundation for Animal Rescue. All rights reserved.
a 501c3 nonprofit organization